Keeping your center and learning to listen in a polarized world 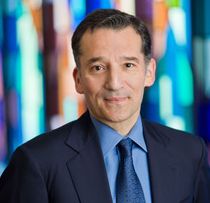 BIO: DAVID WOLPE
Named one of the 500 Most Influential People in Los Angeles in 2016 and again in 2017, Most Influential Rabbi in America by Newsweek and one of the 50 Most Influential Jews in the World by The Jerusalem Post, David Wolpe is the Max Webb Senior Rabbi of Sinai Temple. Rabbi Wolpe previously taught at the Jewish Theological Seminary of America in New York, the American Jewish University in Los Angeles, Hunter College, and UCLA. A columnist for Time.com, he has been published and profiled in The New York Times, Los Angeles Times, Washington Post’s On Faith website, The Huffington Post, and the New York Jewish Week. He has been featured on The Today Show, Face the Nation, ABC This Morning, and CBS This Morning. In addition, Rabbi Wolpe has appeared prominently in series on PBS, A&E, History Channel, and Discovery Channel. Rabbi Wolpe is the author of eight books, including the national bestseller Making Loss Matter: Creating Meaning in Difficult Times. His new book is titled David, the Divided Heart. It was a finalist for the National Jewish Book Awards, and has been optioned for a movie by Warner Bros.

Honors/Awards
Named among the 500 most influential leaders in LA (Los Angeles Business Journal, 2016)
Named second among “world’s smartest speakers” in national survey (Quote.com, 2016)
Named for Voices on the Jewish 100 (The Algemeiner, 2013)
Named one of the fifty most influential Jews in the world (Jerusalem Post, 2012)
Named the number one Rabbi in America (Newsweek 2012)
Offered the benediction at the Democratic Convention (2012)
Named one of the fifty most important Rabbis in America (Newsweek, 2007, 2008, 2009)
Named one of the one hundred most influential Angelinos (Los Angeles Magazine, 2006)
Named one of one hundred most influential Jews in the United States (Forward, 2003)
Winner of the Human Spirit award from the Wellness Community
Winner of a Simon Rockower award for Jewish Journalism (2009)
Award for excellence in single commentary by the American Jewish Press Association (2005)